Coma, also known as the Doof Warrior, is a blind guitarist that hangs from bungee cords on the front of the Doof Wagon. Played by actor/musician iOTA.

The Doof Warror’s red union suit looks a couple sizes too large, and doesn’t have the usual button-down front. His buttons only come down to the chest, as opposed to all the way down like most union suits (which makes me wonder how he gets into it).

The legs appear to be cut just below the knees. Red fabric is wrapped around his left knee and arms like bandages. One option for a red union suit can be found here.

According to George Miller:

“Coma didn’t really have a costume, as such. So there was lots of trying stuff on and I remember thinking that an old farcical onesie would be good with the butt flap hanging out the back.”

The Doof Warrior’s mask is a tan color and is vaguely skull shaped, with the mouth ripped open on the right, and short, straight dread-lock pieces coming out at the back. There is a long piece of cloth that serves as a blindfold and ties around the dread-locks, perhaps securing the mask to the head.

George Miller: “The mask was something that was worked on and influence came from everyone. And certainly Angus and AC/DC was an influence.”

iOTA offers his own version of the mask’s backstory:

“Yeah. I knew that George had said that Coma was found by Immortan Joe in a Cave and taken under his wing and he learned to be a musician. I kind of embellished that for myself. Basically, my story was that Coma was found with his mother’s head, after she had been killed, and he was clinging to it and Immortan Joe came and found him and Coma took her face off and made the mask out of her face, to honor her when he went to war.”

The Doof Warrior plays a custom-made double-neck guitar (bass guitar on the bottom). The wammy bar was the switch for the flame thrower. In an interview with Vice, George Miller disclosed that Coma’s guitar was built out of a bed pan. According to iOTA, the guitar weighed about 60 kg (over 120 lbs).

For the white body makeup, a couple of professional makeup artists recommended Kryolan Aquacolor makeup with a layer of Ben Nye white setting powder applied (or even just flour). For that crackly, primitive look, use some mud mask, and apply the powder over that. Apply the powder with a powder brush. To add sun protection properties to the makeup, just add zinc oxide powder.

The Doof Warrior wears Chuck Taylor All-Star hi tops in charcoal gray.  The ankle labels were removed. On his right shin, there is some kind of black/gray thing with straps/bandages. This might be an ankle brace – it’s hard to tell. It might even be the upper part of a goth-style boot. 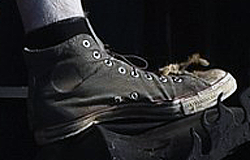 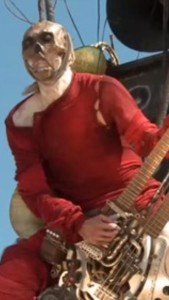 It looks like the mask’s blindfold came off here to reveal the mask’s eyes. 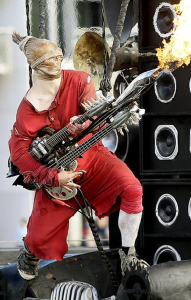 From the Sydney display at the Opera House. 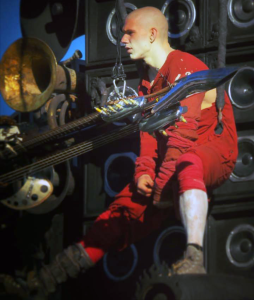 An actor dressed in the Doof Warrior’s costume in Sydney. 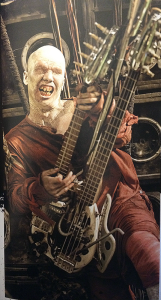 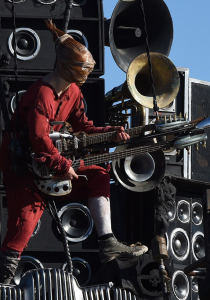 From the Sydney display