Shoulder Pads: Wez wears Rawlings Crusader FB-series football shoulder pads. His left-hand shoulder pad plate is spray-painted silver, his right-hand shoulder pad plate was removed, and the pads have black rooster tail feathers attached to the collar area. Black waffle-pattern carpet padding (known as carpet underlay in Australia) can be found on the deltoid pads. The carpet underlay was manufactured by Bridgestone Australia as recently as a few years ago, but now it appears that Airstep Australia, a carpet underlay supplier, seems to be the only maker of “black comfort” underlay today. For more info, see Special Topics: Pads 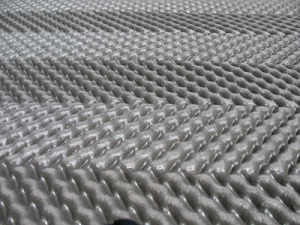 Belt: A leather belt covered with black carpet padding held on by a checker pattern of 3/8″ cone studs. 6 straps on the back. The belt is widest at the front and is cut level at the bottom, although the leather base underneath may be much narrower to allow for movement.

Trousers: Black leather motorcycle-style chaps, with crossbow bolt pockets on the right thigh, and leather flap over the center of the buttocks. Zippers are on the insides. These were probably designed for fetish use.

Codpiece: Black leather codpiece with one central rear thong. Silver male snaps (aka the studs of the snaps) are fastened onto the front. Other snaps appear to allow for the removal of the front of the codpiece, which could have been made as a part of the chaps.

Baseball Shin Guards: He wears part of a baseball shinguard on his right arm (this type has been sold under different brand names including “American” & “Premier”), and has a distinctive kidney-shaped lower crater. Baseball shin guards (possibly Rawlings, Nokomo, or All-Star brand) on his legs. These shin guards have 3 rectangular indentations each, have no instep guard and just have the one segment for the knee on top.

Boots: Square toe motorcycle boots with leather-and-chain boot harnesses (leather on both top straps, chain on the lower) with small pyramid studs on the rear strap.

Armbands: He wears two armbands on his right arm. At the top of his bicep is a black cotton bandana. At the bottom of his bicep is a leather band with a silver concho and feathers. The concho is tied on with black leather lace.

The Final Chase: During the final chase sequence, Wez also wears white war paint on his face, and a metal collar locked onto his neck. 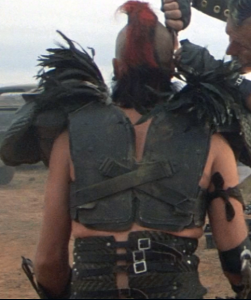 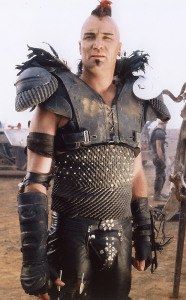 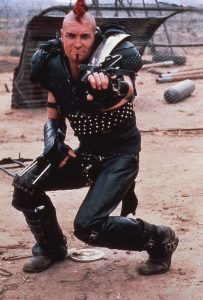