Furiosa’s arm is a prosthetic made out of found items, and is supposedly based on a hydraulic system, with a motor (a small toy airplane engine) that is occasionally used to pressurize the hydraulic fluid (the motor is never used in the film).

The hand has 4 fingers: thumb, index, middle & pinky finger. The thumb is partially made of a jaw (or 2) from vice grip pliers, and has perforated plate attached to the underside. The index finger and middle finger both have perforated plate over them. The index finger has a strip of black or gray rubber material with nubs on it for grip. The middle finger has a hook made from what looks like 2 toothed and serrated jaws placed side-by-side, and these log tongs are only $20 and have a similar look. The pinky finger has some sort of squared A-shape item over it, with the closed/box end of a wrench (spanner) over that (it does appear a wrench was cut in half for this). The finger itself, at least on the stunt version of Furiosa’s arm, just looks like the thumb finger from leather work gloves. The arms worn by the actor & stunt people were, of course, just a glove, with the main parts of the hand made of pop-riveted pieces of leather made to look like weathered steel, and closed up with a tool box hasp.

From the hand run 3 lines and 3 struts. Running from the base of the thumb is a brake cable. Running from the index finger is a clear tube filled with yellow fluid (hydraulic fluid). Running from the middle finger is a hose covered in woven steel (vacuum line). The vacuum line goes under a plate on the hand that has what looks like waxed cord (or shoelace) running through it, with the end of the cord holding a hairpin/cotter/hitch pin. It’s unclear what the function of the pin or cord is. A strut runs from the underside of the hand on the pinky side to the elbow. This strut’s housing is decorated with etchings. A second strut runs from the thumb and has 2 long, flat metal items, with criss-cross serrations, curved around it (these seem to resemble the release handles on vice grip pliers). The brake line runs in between the metal items. This strut appears to be relatively uniform in its diameter all along its length. A third strut runs from the top of the hand and has a combination wrench attached to it with wire and leather cord. Again, this strut appears to be relatively uniform along its length.

All of the struts attach to a cuff below the elbow. This cuff has an elbow guard and is wrapped in brown leather. Next to the attachment point for the combination wrench strut, there is a tiny pressure gauge. All 3 lines are attached to the inner side of the cuff, and later are wire wrapped together before terminating beneath the shoulder pad. 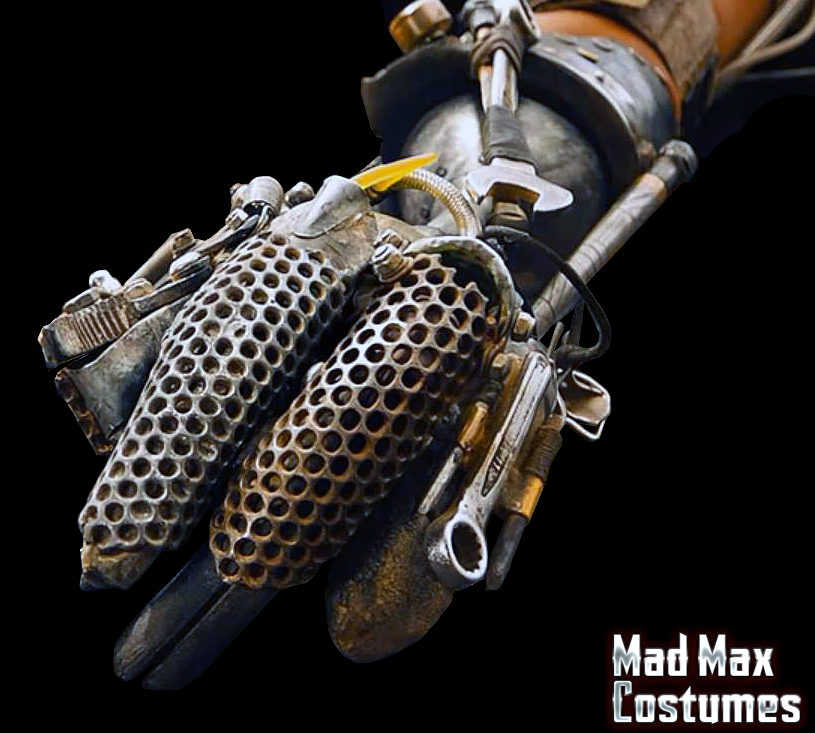