Max wears the Ripsaw Imperator’s tactical vest in the final scenes. It is a heavily-modified South African M83 vest. These South African military vests have nutria brown nylon pouches on a black base, with black webbing, black hardware and black Velcro.

Finding these vests in the US (or anywhere outside of South Africa) has become difficult since the film’s release. The main source in the US for most of 2015 has been Old Republic Enterprises on eBay. They only offer a couple dozen at a time, and don’t be surprised if bids go up above $200.

Other than that, you can check these gun-related websites for the vests and all the magazines that go in them: Armslist.com and AR15.com.

Today’s reproductions of these vests are unfortunately not available in the original color scheme, and instead have more of a uniform color. However, they are fairly affordable, with prices in the $70 range. People who have purchased these reproductions have confirmed that the measurements match up to the original, albeit the materials are flimsier, and the padding is much thicker and white.

I believe the next best alternative to an original M83 is to purchase a black vest, and paint the remaining pockets a nutria brown color.

Another option is to just settle for a coyote-colored vest that has very little black on it. Painting the webbing, Velcro and base black would be a more difficult task than starting with a black vest and painting the pockets.

Four pouches were removed, one pouch was moved, and one pouch was taken apart and modified. One pouch had the Velcro removed and the flap tucked in.

A number of items were added to the modified vest. (These items are explored further below.)

Model 58711. As of 2015, this pouch is apparently out of production and becoming difficult to find online. One black (left shoulder) and one dark earth (right shoulder) is required. The flaps were tucked into the pouch. The Velcro patches on the pouches were removed. The elastic band of the dark earth pouch was crudely cut off. The elastic band on the black pouch holds the nebulizer tubing.  The pouches were sewn to the M83, and the black straps of the M83 can be seen wrapped around the pouches. Pistol magazines were placed into them (see below for more info).

An alternative to the 5.11 pouch is the Condor MA32 pouch. 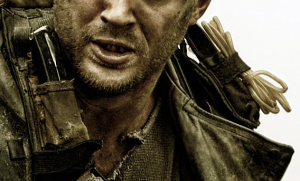 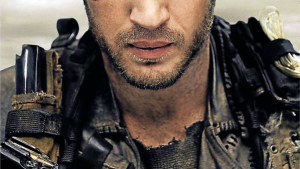 Ram-line 18-Round Pistol Magazines for a Taurus PT92

The magazines sticking out of the 5.11 pouches are likely Ram-line Taurus PT92 magazines. Notable characteristics are the rivet in the corner, and the absence of holes on the left-hand side of the magazine.

Nebulizer tubing is a type of medical tubing used on machines that administer inhalable medications. This tubing was coiled up and carried under the elastic strap on the black 5.11 pouch. According to the assistant prop master who built the vest, “To age the hose, use an alcohol wood stain in a 1 part per 5 parts water ratio, or if you can find one, use a yellowish stain sparingly.” 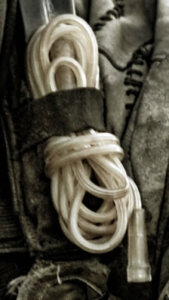 The Pacific is a knife made by Chris Reeve Knives in Idaho, USA that retails for $325. The color of the knife is a dark foliage green (foliage green is the green used in the ACU pattern).

The Chris Reeve Pacific on the M83 is in its original ACU sheath, which was a specially-made Spec-Ops brand Combat Master short sheath. The difference was that the Pacific sheath had an elastic webbing strap that fit the Pacific’s handle, instead of an adjustable nylon webbing strap for universal use. Also, the black plastic liner is cut an an angle instead of straight across.

As of 2014 or earlier, Spec-Ops apparently stopped using screw posts in its sheaths. Also, it appears that all the snaps and grommets are black now, as opposed to foliage green.

The Chris Reeve Pacific can be ordered from ChrisReeve.com, or retailers. They also sell the Pacific sheath by itself. You can buy the regular Spec-Ops sheath here.

If you don’t want a convention-safe resin or rubber replica of the Pacific, and youwant a real knife at a much more affordable price, the Schrade Extreme Survival knife may be for you. While the handle is a bit longer than the Pacific, they share uncanny similarities in their design. The Schrade comes with a black nylon sheath, so you’d still want to purchase a Chris Reeves Spec-Ops, or regular Spec-Ops sheath.

In the top right chest pocket are 2 steel AK-74 magazines. They are probably not AK-47 magazines because:

A less expensive alternative is to simply buy airsoft AK-47 magazines (dummy ammo will not load into them).

The pocket that these are in has had the Velcro removed. The flap was completely removed as well. 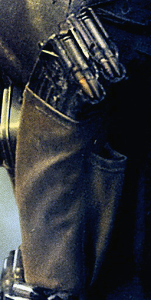 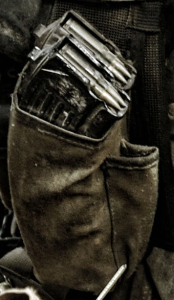 The tin from a Enfield rifle cleaning kit fits very snugly into the small pouch next to the AK magazines. These kits were also used for other rifles.

The dimensions of a cleaning kit are:

These are likely 7.62 dummy rounds that are commonly available. The rounds appear to be tied onto the vest with black string or cord. 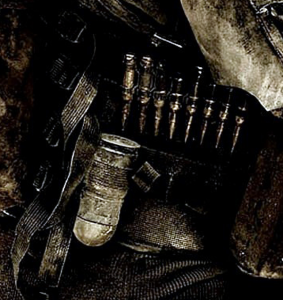 Unidentified 40mm grenade. Dark green on most of its body. Gold tipped.

The vest has 2 grenades in it for a few seconds after Max acquires it. The second grenade is then never seen again. The grenades are held onto the vest in loops sewn from the second-from the-lowest adjustment webbing on the back of the vest.

Here are some suitable airsoft grenades.

These magazines sit inside of the modified pocket on the bottom right. The pocket has a crude seam on the front (the seam is coming apart in the photo below). The pocket may have been formed by detaching the stitching near the medial side of the pocket (side towards the center of the vest) before cutting it and tailoring it to its smaller size. The top edge of the pocket is also crudely cut down (so the magazines show). The depth of the pouch should be approximately 2 3/8″ or 6cm, and as wide as the magazines. 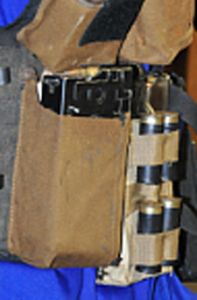 These pouches come in 3 sections. The black one was cut with 2 sections remaining. The coyote one was cut with 1 section remaining. The cutting likely caused structural weaknesses that caused the pouches to come apart, as can be seen in some photos and screen shots. All of the elastic pullover bands were removed. Uzi magazines were stored in one pouch, with random rounds stored in the front loops of the pouches (see below).

Note: There were multiple vests used for filming. While most vests had coyote-black-black (from left to right with the vest facing you), there was at least one vest with a coyote-black-coyote configuration.

You can buy the triple pouches like the prop department did, or you can buy them in double or single configurations. Click below for purchase links: 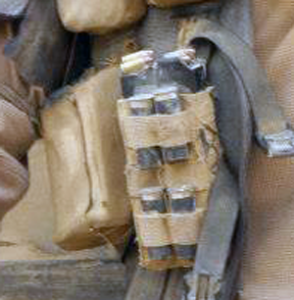 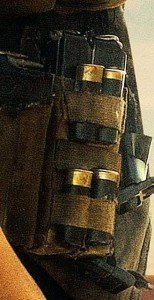 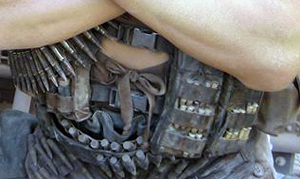 There are four shotgun shells in the coyote M4 pouch MOLLE loops. They appear to be black, and in one photo, there are 2 high-brass shells and 2 low-brass shells. Note: the shells cannot be empty. Empty shells will collapse due to how tightly packed everything is. If your shells are empty, pack them with paper or other dense filler.

In most shots of Max, only two rifle rounds can be clearly seen in the front M4 pouch, with a few rounds in the side M4 pouch. However, photos of the Ripsaw Imperator and early versions of the vest show that both M4 pouches were filled with handgun ammunition – many of them cast lead bullets. Possible calibers could be .38 special or longer .357 Magnum. 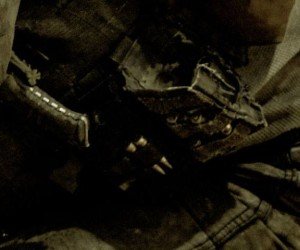 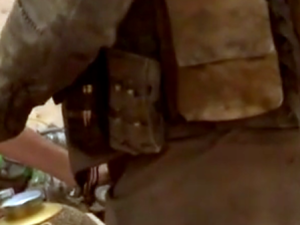 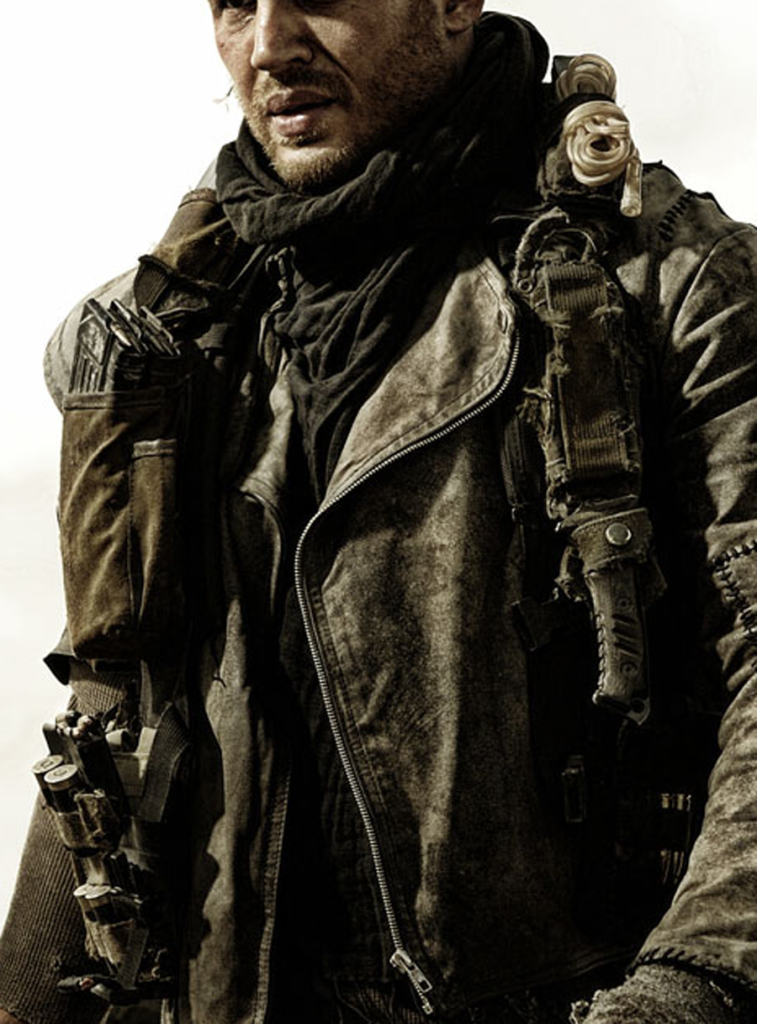 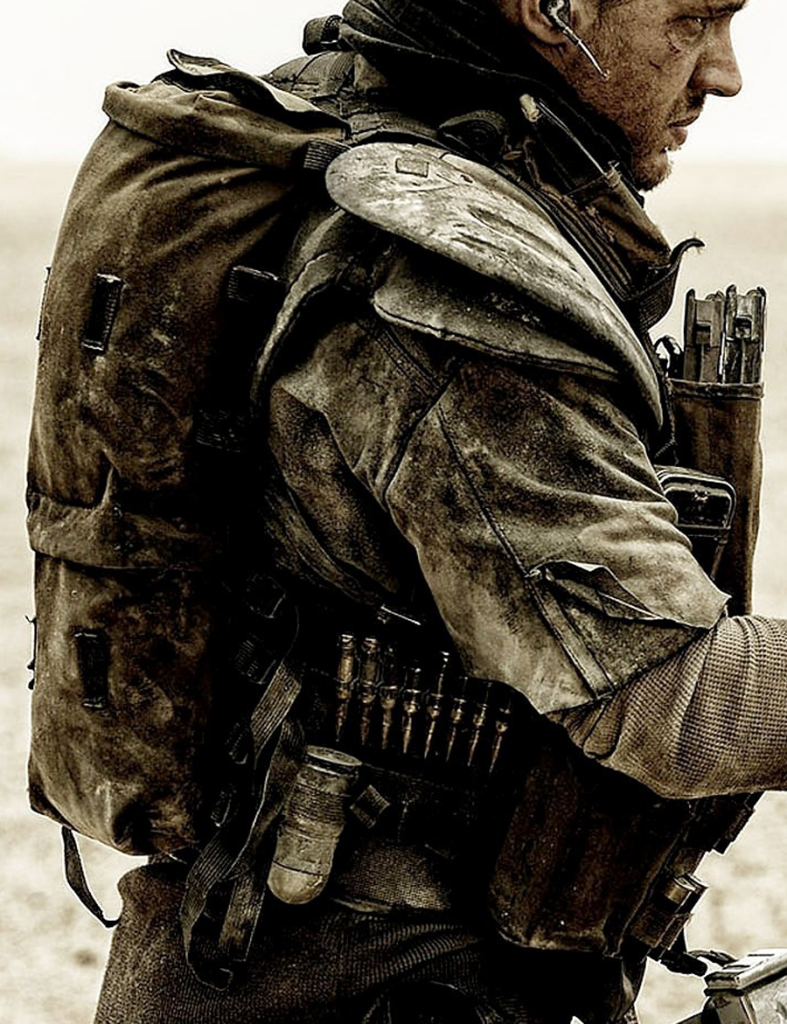 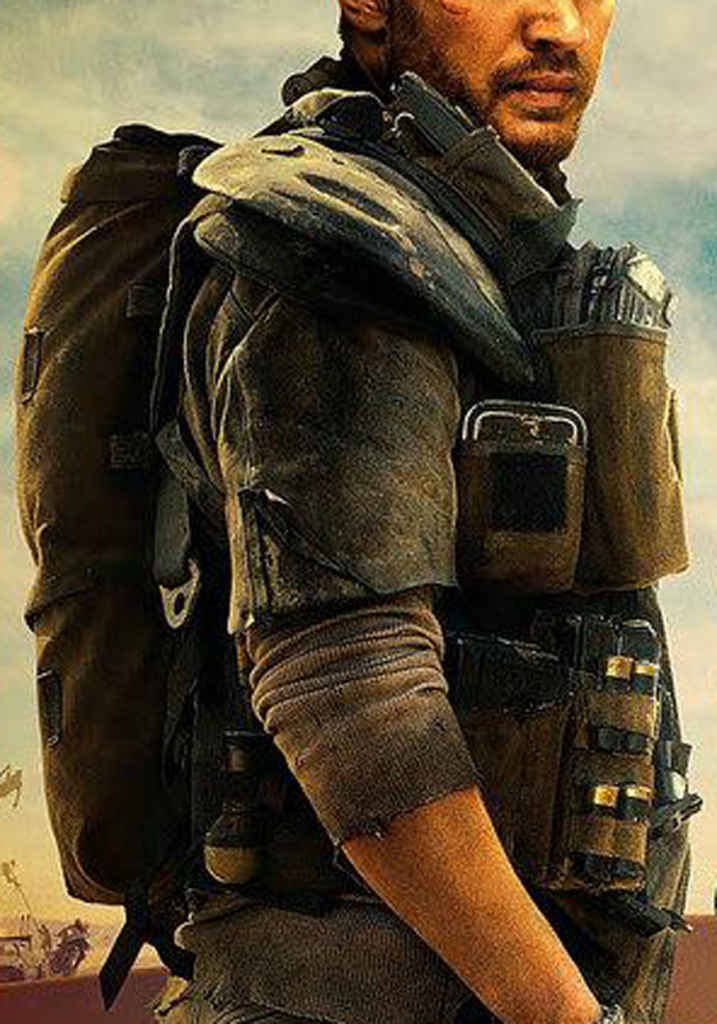 Note how the M4 pouch is falling apart and is missing magazines. 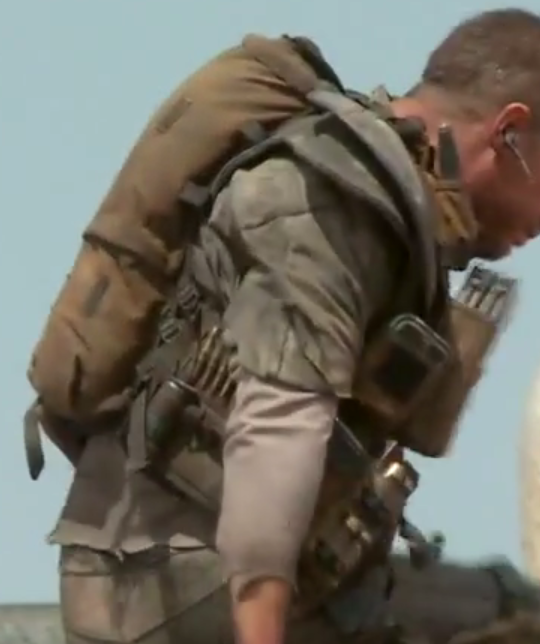