This is one of the hardest items to replicate properly for the Mad Max 2/Road Warrior costume. Since the original object that was used is not readily available, it involves custom leather work.

The other tricky thing about this item is that good images of it in the movie are hard to come by. And the images that we do have make the knee pad appear different depending on which photo it’s in, what angle it’s seen from etc. There are times when I have suspected that there was more than one type of knee pad used in the production. If pressed, I would say that there was just one and that it appearing to be two different pads is an optical illusion… but I wouldn’t be shocked to find that there were two different ones. 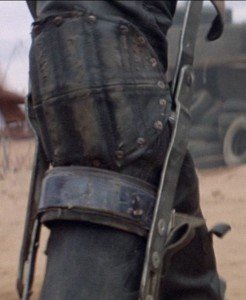 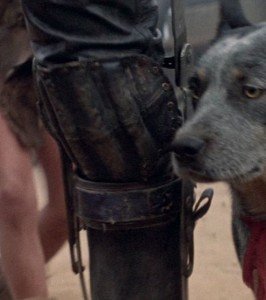 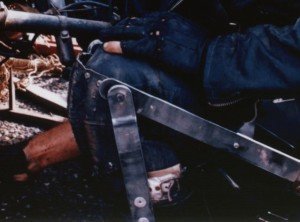 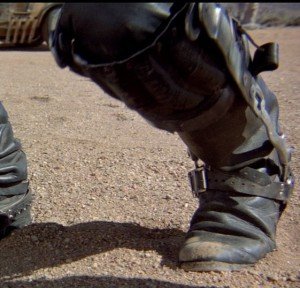 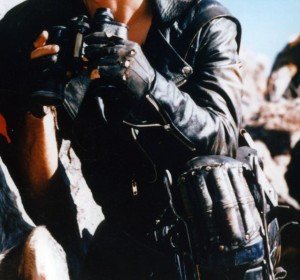 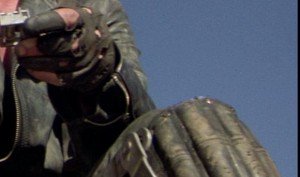 The images above represent the best shots of the knee pad from the movie that I could find. If someone is able to get some better screenshots, please feel free to share them.
WHAT WE KNOW
In 2010 I had a conversation with Richard Taylor of WETA Workshop in New Zealand. They are currently working on props and costumes for Mad Max: Fury Road. He told me he had recently been looking at the original costume from Mad Max and that the original knee pad was in fact a 1930s cricket pad. He even mentioned that the padding inside the ridges was the old style, made of a straw or hay-like material, like they use in old mattresses.
I haven’t found any images online of a cricket pad that looks quite like Max’s knee pad, but finding very old photos of cricket gear has been difficult. I haven’t found good shots of anything pre-1950s really.
If anyone comes across cricket gear from any era that looks like Max’s knee pad, PLEASE take photos and let the rest of us know. (Maybe there’s a cricket museum somewhere?)
MAKING THE PAD
Several fans have had a go at making this pad, and some of them have gotten pretty good results. I knew that a screen-accurate pad was beyond my skill level so I went to my local leather shop and had them take a crack at it. They’re second generation master leather craftsmen and they’ve done a wonderful job creating unique items for me in the past, using nothing but stills from the movie.
They tried several different methods for making this pad and we tweaked it many times before I got a version I was happy with.

The final version was made by first cutting out a circular piece of thin moldable plastic, then attaching four strips of foam to create the padded ridges (my leather guy and I had quite a debate as to whether or not there were three or four ridges, but we eventually agreed there were four).

Here’s a photo:
(Note – These in-progress photos show a test pad. The final pad I ended up with was slightly different, but I don’t have in-progress pics of it) 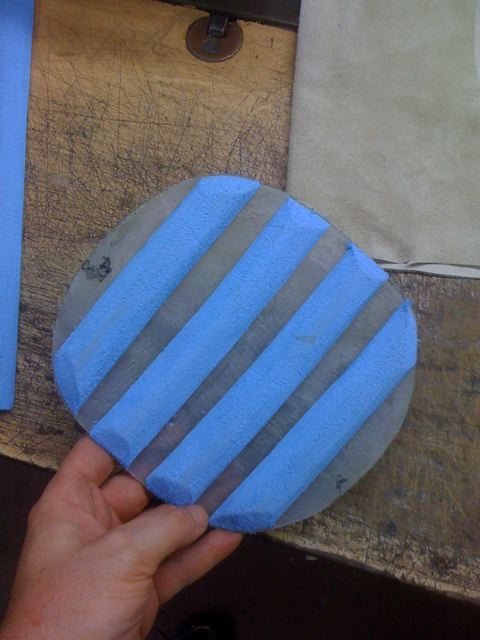 The tricky thing about the pad is that it has a seam straight across the middle. This part can be hard to add, and many fans leave it out when making their pad.
My guy made this seam by first joining two semicircles of leather and stitching a seam. Here it is shown from the back, with the two excess flaps of leather from the middle seam glued down:

And then gluing the joined pieces over the foam and plastic base. (Barge brand rubber cement is best for this sort of job).
Bear in mind that the leather needs to be thin enough that it can stick to the contours of the pad.
Once the glue had set, he traced out and glued another circle of leather to the back of the pad. 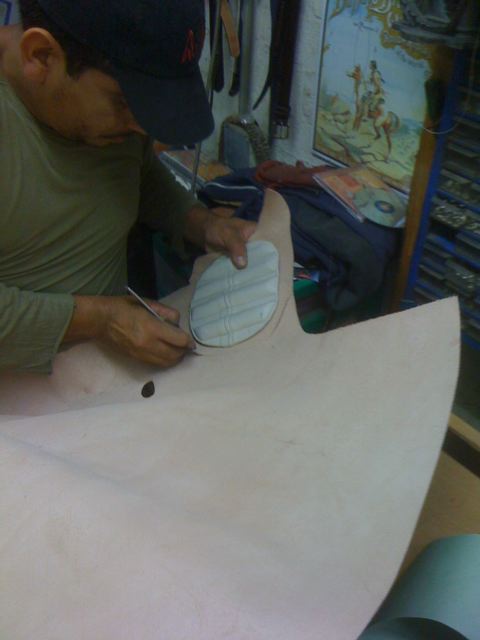 Then, the pad was stitched to create the seams that go down along the sides of the ridges, and that also run parallel to the middle horizontal seam. There is also a stitched edge all the way around the perimeter of the pad.

These stitch lines are important for the look of the pad, but they are hard to make without the right equipment (unless you want to do a lot of laborious hand stitching). The machine has to be able to stitch through the leather and the hard plastic without wrecking the pad. 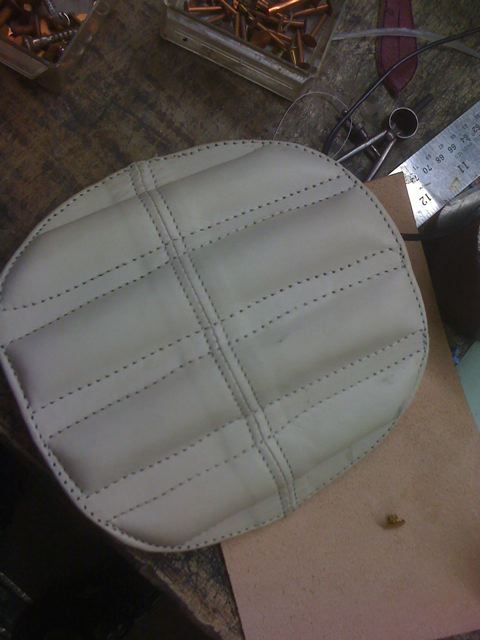 Next, the rivets are added. You’ll see in the screen shots that the rivets have a tarnished brass or copper color and are distressed as if they’ve taken a beating have been hand hammered into place. Some shots make it almost look like they have slots, like they’re screw heads. Hard to tell.
What I can tell you is that if you take shiny brass rivets and heat them with a blow torch, they’ll turn a nice tarnished color. Remember to do this before you add them to the pad or you’ll burn your nice new leather pad.

The pad is attached around the leg with a leather strap and buckle. Max actually used a boot strap from his Rossi motorcycle boots for this pad. And he used another Rossi strap under his shoulder pad. That’s why Max’s boots in Film Two only have two straps on them rather than the four he had in the first movie. Pretty resourceful guy that Max, eh?

The straps are about 16cm wide. The actual vintage-style Rossi strap buckles are impossible to find (at least they’ve proven to be here in the US) but any small rectangular center-bar buckle should do the trick.

I chose to have my pad made in a light tan leather. Why? Because modern black leather is black through-and-through, whereas older leather is brown and just dyed black. Max’s pad in the movie has a ton of wear on it and the black dye has worn away to reveal light brown leather underneath.

After the pad was completed in light tan, I added coats of black leather dye until it was completely black. (I recommend a cheap water-based leather dye like Kiwi brand. Better brands of dye are actually bad because they cover and stick better, making them too hard to weather off properly).
Then I strategically used a rag soaked in acetone (aka nail polish remover) to take off just enough dye to reveal brown in all the right places. Add some dirt over that, and you’ve got a vintage looking pad.

Here’s my preferred water-based leather dye. Again, I like this stuff because of its LACK of coverage and its ease of removal. Last I checked you could order it through Amazon.com. I’ve found it surprisingly hard to find lately in brick and mortar stores.

You’ll probably find that the pad has a hard time staying up on your knee when attached with just the single leather strap. Guess what? Mel looks to have had the same problem in the movie. There are shots where the pad has slipped down to the top of his boot, and some shots where the pad is just missing altogether (probably because it was a pain in the ass to deal with and they just wanted to roll camera).
For my pad, I had some velcro attached to the back, and another piece sewed to the knee of my leather pants. Now it stays on very well.

Here are some pictures of the pads I had made while testing out different patterns and designs. 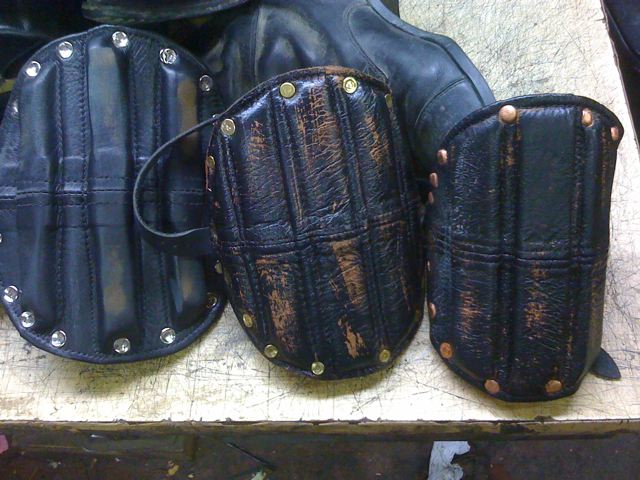 And here is the current pad I’ve settled on: 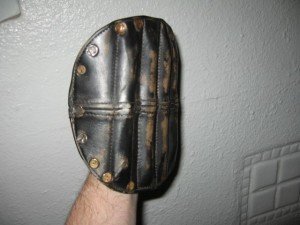 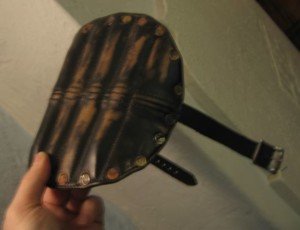 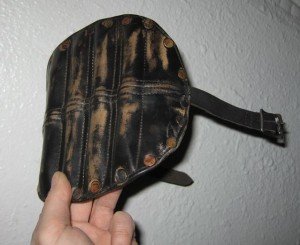 REPLICAS AVAILABLE
Finally, before I get a bunch of inquiring emails, I should mention that the guy who made me this pad is not able to do a run of these for fans. Sorry. If I am able to get any in the future I will certainly offer them up, but at the moment it does not look like it’s going to happen.

But guess what? There’s good news. South Beach Leather now offers a Mad Max knee pad online for $35 and it’s not a bad version. It’s not quite screen accurate, but it’s better than many of the fan pads I’ve seen out there. It looks like it was cribbed from photos of one of my earlier versions.
I’d say it’s the best way to go unless you want to make your own.

What’s wrong with it?
The problems with it are that the attaching strap is too wide, the rivets are the wrong color and aren’t distressed, and the ridges are too close to the sides.
Also, it looks like the shape is a bit off and the size might not be quite right, but I’d have to see a photo of it attached to a knee to be sure.
But again, these are nitpicks. Be glad someone has made a pad available to the masses. And I don’t care if they copied it from one of my designs since I wasn’t able to offer them up in quantity anyway. All I care about is that people can enjoy putting together a reasonably accurate Mad Max costume.
Here’s a link to their pad and a picture of it.
South Beach Leather MAD MAX Knee pads / Pad / Road Warrior pads